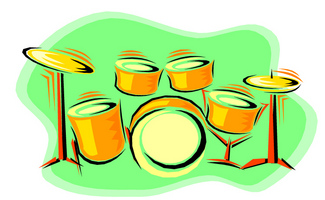 "Let's do it!" Caroline answered.

The girls picked up their drum sticks and began to warm up on their drum sets. They were set up in Barbara's basement. They were celebrating International Drum Month by having their own drumming party. Barbara had the most space, so Cheryl, Allison, and Caroline had packed up drums of their own and had come over early one Saturday morning.

They planned to enter as a group in a drumming competition being held at the end of the month in the city they lived near. It was a yearly competition, and there were lots of entries. They had attended each year for the last three years and learned so much. There were demonstrations, an expo of drumming equipment, and concerts.

After a few minutes of warming up, Barbara took charge. (She had that natural leadership personality and typically guided the group. The others didn't mind since she was nice about it most of the time.)

"From what the rules say, we can play a track and develop our own drumming rhythm to accompany it. I've written out some possibilities. Let me know what you think."

The girls worked for the next hour, running the beats as Barbara had suggested, making changes, and giving new ideas. Barbara liked most of the ideas, and when she disagreed, she did so graciously. By the time they were ready for a break, they had agreed on the accompaniment they wanted to perform.

The girls went upstairs for a mid-morning snack. While drinking orange juice and enjoying some bagels with hazelnut cream cheese, they discussed the upcoming competition.