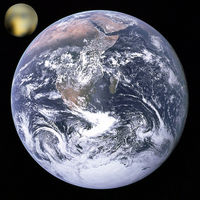 Comparing Pluto's size to Earth's size (as if they were placed side by side) Image credit: NASA

So what is a dwarf planet? It is a round body that orbits the sun. It is not a moon. It has not cleared its orbital path of "junk." Dwarf planets are so small they don't have enough gravity to sweep up the other bits of matter within their orbits. Earth has thirteen times more gravity than Pluto does.