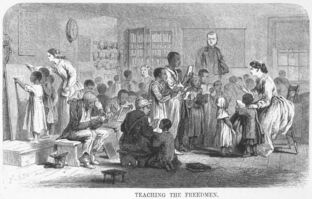 People in this country were tired of Reconstruction by the middle of the 1870s. Southerners were not happy with the government. They saw it as a group of people who did nothing but tax people and then spend the money. The federal army was leaving the South. Whites were gaining back the power they lost right after the war ended.

The effort to help the South was not a total failure. By the 1870s, all of the Southern states were part of the Union again. The South was rebuilding its cities. They were growing quickly. People who had left were coming back to start their lives over again.

As farms were rebuilt, people in the South started growing crops again. Some of these products were tobacco, cotton, and sugar. They were more profitable than many food crops. Farmers began to earn good money again. But the focus on sugar, cotton, and tobacco meant that the South was growing less food to feed the people who lived there. Much of the food was shipped in from other parts of the country.