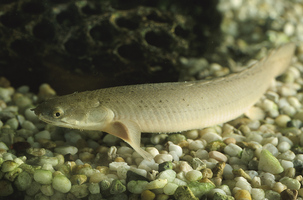 Electric eels are not really eels! Instead, they are a type of knifefish. They can have bodies up to nine feet long. They live in slow-moving rivers in South America. They must come to the surface to breathe air about every ten minutes. They eat mostly fish. They have been known to even eat birds and small mammals!

So, why are electric eels not true eels? Both animals have long, cylindrical bodies. They certainly look like eels. Here are some of the reasons:

With these differences in mind, scientists do not consider electric eels to be true eels. In fact, they are more closely related to the catfish.