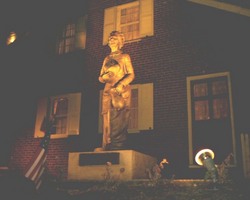 Statue of Jenny Wade in front of her home, now a museum.

Mary Virginia Wade was born May 21, 1843. Today, she is better known as Jennie. She was the only civilian to die during the Battle of Gettysburg. As a child, Jennie preferred the nickname Ginnie. After her death, a newspaper misspelled the name. It is that misspelled name that has stuck with her after her death.

After the first day of the battle, Jennie and other members of the household had gone to Jennie's sister's house. The family felt they would be safer there. They also went to help Jennie's sister Georgia. Georgia had given birth to a baby boy just hours before the battle started.

The people in the house managed to get through the first couple of days of the battle without being injured. The house was not doing as well. It had over 150 bullet holes in it.

On July 3, 1863, Jennie had gotten out of bed early. She and her mother had planned to bake bread. They were using the bread to feed Union soldiers that were fighting near their house.

While kneading the dough, a sharpshooter's bullet pierced two doors in the house. The bullet struck Jennie in the back and hit her heart. She was killed instantly. It is believed that Confederate soldiers who were on a hill near the Wade house had fired the bullet.

Jennie's sister screamed. Union soldiers near the house came running. They carried her body into the basement. Jennie was buried in her sister's yard for six months. Her final resting place is the Evergreen Cemetery.