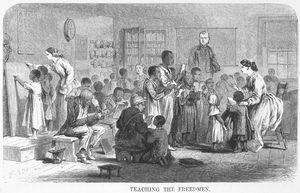 Abraham Lincoln was killed before the official end of the Civil War. He had a plan to rebuild the South. Congress was against the president because they thought his plan was too easy on the South. Before Lincoln was killed, they agreed to start a relief agency. This agency was known as the Freedmen's Bureau.

The bureau was started to help blacks and poor whites. It was the first federal relief agency in United States history. It did not have strong support in Congress. By 1869, the agency was largely taken apart. It did what it could in the short time it was in action. One of its main impacts was in the area of education.

More than four thousand grade schools for blacks were built with the help of this agency. Both young and old were ready for the chance to go to school. Grandparents sat next to their children and grandchildren. They wanted the chance to learn to read and write. Most of the teachers in the schools were volunteers. Most of them came from the North. The bureau also helped to start colleges. Many of the graduates of these schools went on to become teachers. There were black teachers in many grade schools in the South by the 1870s.