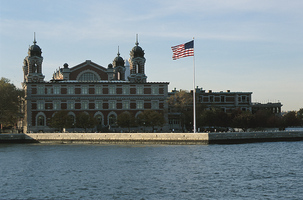 If you had been one of the first settlers to come to North America, you probably would not have noticed it. It was a small island in the harbor of what would become New York City. It was not quite three acres in size. The Mohegan tribe, which had settled on the shore across the bay, called it Gull Island. When the tide was high, it all but disappeared beneath the water.

In 1628, Dutch settlers found a large bed of oysters near that small piece of land. Is it surprising that the Dutch named it Oyster Island? Anderson, a pirate, made camp on the island in the mid 1700s. He was captured, tried, and sentenced to hang there in 1765. It was called Gibbet Island for twenty years. A gibbet was the mechanism used to hang Anderson. In January 1785, Samuel Ellis bought the land and renamed it after himself. It has been known as Ellis Island ever since.

The United States government decided to purchase Ellis Island in 1808. It paid $10,000 to the Ellis family. The government had decided that the island would be a good place to build a fort. This fort would help defend New York City as it grew larger. Fort Gibson was completed in 1814. It stood guard over New York Harbor until 1861.