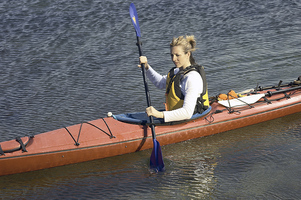 Beth gulped. Why had she agreed to this? She had gone along with the idea of going on a kayaking trip with seven guys down what she thought would be a calm, easy-flowing river. Now, as she looked out to the river from the small park where they would put in their kayaks, she was having second thoughts. She watched where the river flowed over rocks and the current swirled. She watched two ladies leave in a canoe and go "whoo hoo" as they headed down the first set of rapids. Beth's knees began to feel weak.

This river was rated as Class I and Class II, which meant that there were some obstacles in it but they would be relatively easily navigated. The rapids were not heavy or dangerous, but they could spin your boat around if you didn't work with the current.

Beth's son noticed her fear and tried to encourage her.

"It's not so bad, Mom, once you are actually in the boat. They look worse from the shore." Beth's son had done whitewater kayaking so this looked tame to him.