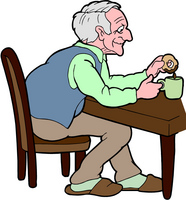 What his grandkids don't know would surprise them. Many years ago, Grandpa Irving was just like them. Grandpa Irving had lots of fun in high school. His grades were pretty good, and he loved being in the marching band. When he graduated from high school, he had to make choices just like his grandkids will make. He thought about going to college but didn't. Instead, he enlisted in the U.S. Army.

The Army sent Grandpa Irving all the way around the world. He was sent to fight in Vietnam, like many young men today are sent to other places to fight. For many months, Grandpa Irving saw many terrible things. He also made many very close friends. But most of all, he thought about his girlfriend back home. He wrote to her every week.