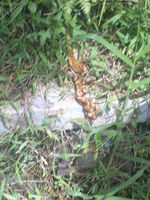 Care to try a tasty bowl of earthworm soup? How about a nice plate of fish heads or a slice of casu marzu (maggot cheese)? You may be surprised to know that in many places these dishes are considered delicacies. The Chinese once used earthworms in traditional fever medicines. Some Koreans today believe eating a bowl of earthworm soup before bedtime will keep the body healthy. In Asia, earthworms are commonly called "Earth dragons." Some believe the worms ward off a variety of diseases. Earthworms are high in protein. People sometimes eat them fried as well as in soups. The French, the Aztecs, and the Vietnamese all have eaten worms at different times in history. YUM!

Fish heads are more commonly eaten in Eastern countries, but crappit heid is a traditional Scottish Highlands dish. Crappit heid is translated into "stuffed head." It consists of the head of a large cod or similar fish. The fish is washed, de-scaled, and then stuffed with a mixture of oats, suet, onion, white pepper, and the liver of the fish used. This dish is seldom served anymore. (Whew!)