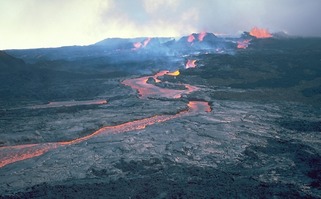 There are many active volcanoes in the world. Some can be found in the United States. One of these is called Kilauea. It has been erupting for many years, since 1983. Another is Mauna Loa. Its last eruption was in 1984. Both of these volcanoes are in Hawaii. They are protected by a national park. It is called Hawaii Volcanoes National Park.

This park was formed more than one hundred years ago, in 1916. It was formed before Hawaii became a state. It is on the Big Island of Hawaii. It is an International Biosphere Reserve. This means that people use this park to study how to use resources. It is a World Heritage Site. There are amazing natural features here. Native Hawaiian culture can also be seen here. World Heritage Sites work for balance. They want to make sure that visitors enjoy the park without harming it.