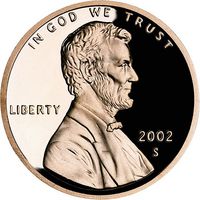 The Lincoln family moved a lot. They first lived in Kentucky. Then they moved to Indiana in 1816. Abraham often heard his parents talk about slaves. They did not like slavery. A slave worked very hard for someone else. He or she was owned by another person. Slaves were bought and sold. Slaves were often treated badly. Lincoln's family moved to get away from slavery. While in Indiana, Abraham's mother died. He was nine years old at the time. Abraham's father married again. Sarah Lincoln treated Abraham as if he were her own son.