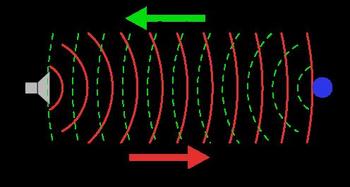 How Does Sonar Work?

Have you ever made an echo? An echo is made when sound hits something and bounces back. You can make an echo in a gym or in a canyon. Your voice sends out sound waves. When the waves hit the walls of a gym or a canyon, they bounce back. Your ears pick up the sound waves and you hear your own voice, a few seconds after you made the sound!

Sonar stands for sound navigation ranging. Sonar uses the way sounds bounce back, or reflect, off objects. A sonar device can be active or passive. Passive sonar just listens for sounds and uses them to find the distance and location of objects.

Sonar has many uses. Passive sonar is used by the navy to find ships and submarines. Scientists use it to find whales or other animals in the sea they want to study. Active sonar is used to measure distance with sound. When sound hits an object, some of the sound waves are reflected back to the device. The distance to the object can be found from the time it takes for the sound to travel to the object and back.