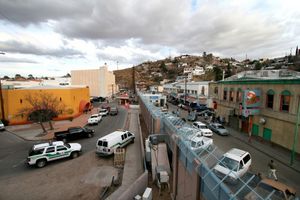 Caption: The towns of Nogales, Arizona, U.S., left, and Nogales, Mexico, stand separated by a high concrete and steel fence. Many consider the area one of the most dangerous along the border, with numerous reports from U.S. Border Patrol agents of being spit on, having rocks thrown at them, and gunfire. Despite the existence of a legal crossing point, enough illegal crossings occur to warrant 24-hour Border Patrol operations there.

Many people want to immigrate to the United States. There are many jobs and opportunities here. It can take a long time to get permission to move here. Some people can't or aren't willing to wait. Others stay in this country after they are supposed to leave. These people have many different reasons why they don't want to go home. People who come here illegally or stay longer than they are supposed to are called illegal immigrants. They have no documents permitting them legal entry.

Many of the illegal immigrants in this country come from Mexico. The border between the United States and Mexico is long. Not all of it is guarded. This makes it seem easy to sneak across. It is much harder than it looks. The areas that aren't watched closely are usually deserts. Many immigrants die from the heat or lack of water while trying to cross the border.

Others pay a person to help them sneak across. This person guides the immigrants across the desert. The person could also hide people in a car or the back of a truck or tractor-trailer. This can be dangerous. Not all of the guides are honest. Immigrants have died in the back of these trucks. Yet people are still willing to pay money for the chance to get into this country.

In Florida, illegal immigrants from Cuba come by boat. If the immigrants are caught while still on the water, they are sent back to Cuba. Those that make it to shore are allowed to stay. Immigrants often come in homemade boats or inflatable rafts. These boats are barely large enough to hold all of the people in them. Some don't have enough fresh water for the trip. Many immigrants drown trying to come to this country.