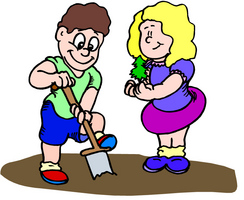 Jake and Jackie Plant a Tree

Jackie skipped up the street toward Jake's house. She and Jake had been friends since kindergarten, when his family moved into the same neighborhood. Both families had become friends, so Jake and Jackie naturally spent a lot of time together.

Jake was standing in his front yard with his arms crossed, staring at a potted seedling.

"I'm trying to figure out what to do with this," he answered.

Jake looked at her and rolled his eyes. "It's a plant."

"I KNOW that," Jackie said, playfully punching him in the arm. "What kind of plant is it?"

"It's an oak tree. My mom won it at a gardening club meeting. She told me I could plant it, and it would become my special tree. I just don't know how to plant it."

"It's looking kind of brown, don't you think?" said Jackie.

"Yes, I know. I've been watering it but I think the pot is too small."

"Let's go on the Internet and find some instructions," Jackie suggested.

Jackie and Jake headed to Jake's kitchen where a laptop was on the table.