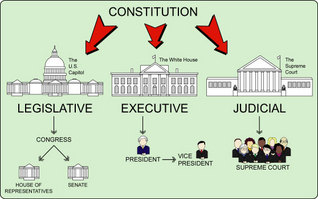 "I'm so full from eating all that pizza," Jean groaned. "But I want to keep studying for my citizenship test. This stuff is interesting."

"The structure of the government," Jean replied. "How many branches of government are there in the U.S.?"

"Nothing like getting right to it," Rob teased. "There are three branches: the executive, legislative, and judicial."

"Who is the head of the executive branch?" Jean quizzed.

"The president of the United States," Rob said confidently.

"And what does he do?" asked Jean.

"Well, he runs the country," Rob replied. "He meets with important people from other countries. He signs bills so that they can become laws. He can also veto a bill."

"What does veto mean?" Jean asked.

"It means to stop a bill from becoming a law," Rob said. "The president is also the commander-in-chief of the military. This means that he runs the armed forces. We vote for a new president every four years in November. The president can serve two terms in office. Lots of times, we elect the same president to serve a second term."

"Wow, the president has a lot of responsibility," Jean said. "Does he have anyone to help him?"

"Sure, he has lots of people to help him," Rob replied. "First of all he has the vice president. He also has advisors called the Cabinet. These people are appointed by the president. Then they have to be approved by a majority of the Senate.

"There are fifteen cabinet positions right now. They include the departments of State, Treasury, Defense, Interior, Agriculture, and the Attorney General. There are also the departments of Commerce, Labor, Health and Human Services, Transportation and Energy. The others are Housing and Urban Development, Education, Veterans' Affairs, and Homeland Security," Rob recited.

"Wow, you should go on Jeopardy!" Jean exclaimed. "But what do these Cabinet people do?"