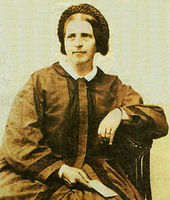 Most of us have never visited the Alps, but one author made those majestic mountains seem like home to many readers. Johanna Spyri, author of the famous children's book, Heidi, used her own childhood memories of Switzerland as the setting for this book.

Johanna was born on June 12, 1827, in rural Switzerland and had a simple childhood. Her father was a doctor and a surgeon. Her mother may have inspired her daughter's love of writing because she wrote religious songs and kept a journal. Johanna had five brothers and sisters. Her village was in the Alps, which inspired the vivid descriptions of mountain landscapes in Heidi. Later, Johanna went to Zurich to study piano and languages, but she never got used to the busy pace of city life.

Johanna met and married a lawyer named Bernhard Spyri in 1852. The couple stayed in the city. They had one son. She loved to write in her spare time and published her first story in 1871. She later wrote lots of short stories. Johanna missed the mountains, and she felt alone in the city. Her strong faith and her writing helped her. Johanna decided it was time for a bigger project: a novel. She took her own memories and wove them into Heidi. Heidi was published in 1880.