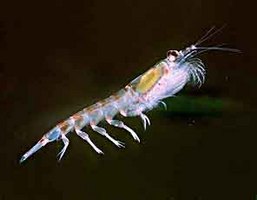 Krill are little animals that look like tiny shrimp. They live in every ocean in the world. Krill are sometimes referred to as a keystone species. They have a very important role in the ocean's ecosystem. Krill provide food for many animals, including fish, birds, seals, penguins, and even whales. Krill are especially important in the Antarctic. Scientists believe that if krill were to disappear, then most other animals in the Antarctic would also disappear.

Krill are invertebrates, or animals with no backbones. They are about two inches long. Krill have many legs. The legs are called swimmerets. The legs look like small feathers, but they are used like fins to help krill move in the water.

Krill hatch from eggs that are floating freely in the ocean. Krill have an exoskeleton. Their bodies are in segments, or sections. As krill develop, they molt, or shed their exoskeletons. This allows krill to add new segments to their bodies. Adult krill have the unique ability to decrease in size if there isn't enough food to eat.