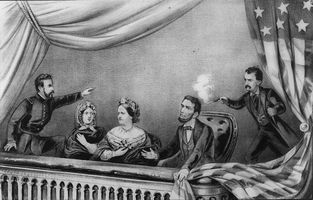 On April 9, 1865, General Lee had surrendered to General Grant. Pockets of the Southern army continued to surrender. Lincoln had helped lead the North to a victory in the war. Unfortunately, he did not get to see the official end of the war. Five days after Lee's surrender, he was assassinated.

During the winter before the end of the war, a group of men had a plan. John Wilkes Booth led these men. He was an actor at the time. Booth and the group planned to kidnap Lincoln. They wanted to exchange him for Southern prisoners. Booth tried to kidnap Lincoln several times but wasn't able to do it. Booth then changed his plan. He decided to kill the president. He also planned for other members of his group to attack the vice president and the secretary of state.

On April 14, 1865, the president and his wife went to Ford's Theater. They got there about 8:30 in the evening. At about 10:15, Booth entered the box where Lincoln and his wife sat. Booth shot Lincoln in the back of the head at point blank range. Booth then jumped from the balcony. He broke his leg but managed to limp away. He escaped from the theater on a horse that was waiting outside.