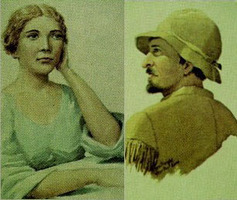 The Oregon Territory was a very large area of land. Native Americans had lived there for a very long time. In the 1800s, white settlers began to move there. Some of the first settlers there were Marcus and Narcissa Whitman.

Both Whitmans were from New York. Narcissa Prentiss was born into a very religious family. When she was sixteen, she decided she would be a missionary. She volunteered to be a missionary in the West. She was not allowed to go at first because she was a single woman.

Marcus studied to be a doctor. He practiced medicine for four years in Canada. In 1835, he went to Oregon to look for a good place to build a mission.

In 1836, Marcus and Narcissa were married. It does not seem that they knew each other very well before they married. But they both wanted to be missionaries.

Within a month, they left their homes and their families to travel to the West. Narcissa would never see her family again. The Whitmans went with another missionary couple, Henry and Elizabeth Spalding. Oregon was their goal. The group traveled with fur traders. Narcissa and Elizabeth became the first white women to cross the Rocky Mountains.

The Whitmans decided to start a mission near what is now Walla Walla, Washington. Their goal was to help members of the Cayuse tribe of Native Americans become Christians. The Whitmans worked hard to make their goal come true. They preached to the Native Americans. They held church services and built many buildings.

At first the Cayuse were interested in the missionaries. But the Whitmans made no effort to understand the Cayuse way of life. The Whitmans did not honor the customs and traditions of the Cayuse. The Native Americans had practiced their religion for hundreds of years. They weren't interested in becoming Christians.

Narcissa's life was very hard. On the journey to Oregon, she had become pregnant. She gave birth to a daughter, Alice, in 1837. When Alice was two years old, she drowned in a river near the mission. Narcissa did not have any friends or family that could help her during this time. She struggled to stay strong.

In 1842, the mission was closed. It had not been successful. Marcus went back to the East. He was able to get the mission reopened. Then he led a wagon train to Oregon. There were close to one thousand settlers in the wagon train.