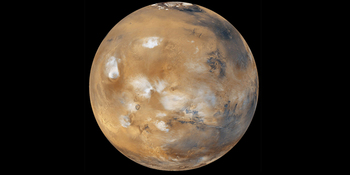 Mars is a cold desert where rain never falls. Even on summer days, the temperature may only reach 10 degrees F. At night the temperature drops to 110 below zero! Winters are so cold that the air freezes out of the sky! Near the north and south poles, carbon dioxide in Mars's air freezes into a solid and drops to the ground. The frozen gas stays there until spring comes, nearly six months later. Then it returns to the air.

In some ways, Earth and Mars are alike. They are both rocky planets. Mars has mountains, canyons, and sand dunes like Earth. Mars has four seasons like Earth because Mars is tilted on its axis, too. The seasons are much longer on Mars, though. That is because Mars's year is much longer. Earth takes about 365 days to make one orbit around the sun. But Mars takes about 687 Earth days to make its trip. Days on Earth and Mars are about the same length.