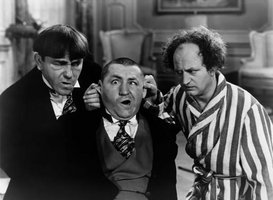 Caption: Frame from Disorder in the Court. Moe is on the left.

You probably remember your mother telling you not to hit your brother or sister. That is a good family rule for real life. However, in the world of show business, one kind of comedy called slapstick is based on punching, shoving, and playing rough practical jokes. Moe Howard, one of the Three Stooges, was a master of slapstick humor. He made a career out of beating up his two brothers!

Moe Howard was born on June 19, 1897, in Brooklyn, New York. His full name when he was growing up was Moses Harry Horwitz. His father was a Jewish clothing cutter. His mother was busy raising Moe and his four lively brothers. All the boys loved to wrestle and horse around. Three of the Horwitz boys later became the famous Three Stooges.

Moe had an independent streak. His mother liked his long, curly hair, but Moe didn't. His friends teased him, so he decided to do something about it. Moe took a mixing bowl out of the kitchen. He took the bowl and a pair of scissors out to a shed. Then, Moe boldly put the bowl on his head and cut off his curls. Moe's brave attitude did not last long. He hid under his house for a few hours! What would his mother say? When he popped out a few hours later, his mother was so relieved that she didn't get upset about his new hairstyle. Moe liked his new hairstyle. He kept it for the rest of his life!