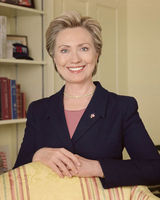 Hillary Rodham Clinton was born on October 26, 1947. She was given the name Hillary Diane Rodham. She was born in Chicago, Illinois. Her father owned a small business. Her mother was a homemaker. She has two younger brothers.

In 1965, Hillary went to Wellesley College. She studied government. She wanted to be a leader in government. Hillary graduated with honors.