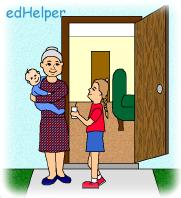 Camilla had been sick for a long time. Now she was finally well enough to leave that awful hospital bed, but she didn't look very well yet. Camilla had lost some weight and also her strength while she was in the hospital. The doctor suggested to her family that they boost her caloric intake for a while.

"Let her have all the milkshakes she wants," Dr. Leyton said with a wink, "the thicker the better."

Camilla's mother stopped to get a chocolate milkshake on the way home. Camilla was still working on it when they reached the house. Sipping the shake through the straw was difficult. It used what little energy she had. She felt spent and full before even finishing half of it.

Her grandmother met them at the door with baby Tucker. "Welcome home!" Meemaw exclaimed, hugging Camilla with her free arm. "Just look at you! We've got to fatten you up!"

Camilla rolled her eyes. "Meemaw," she said in a mildly annoyed tone. She was beginning to feel like a pig being made ready for the market.

"What would you like for supper, sweetie?" her mother asked.

"Can we grill hamburgers?" Camilla asked hopefully. She flopped down on the sofa and sat her milkshake on the coffee table.

"That's a wonderful idea!" Meemaw said. "I'll make some potato salad and baked beans to go with them." She put Tucker down on the floor.