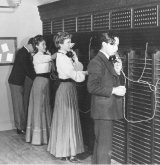 Using the telephone is easy. We can dial a phone number. We can talk to a friend. It was not always easy.

The telephone was invented in the 1870s. Operators had to connect calls. The operator sat at a switchboard. A switchboard was where all of the telephone lines came together. The operator would connect the lines of friends. The operator would plug one person's line into the other's line. Then the friends could talk. Operators also had to tell people who won elections. They had to let people know when a streetcar was not working. They also had to tell people when a storm was coming.

Telephone operators had to be polite. They had to have patience. The first operators were boys. The boys did not do a good job. They played and did not work. In 1878, women became operators. Women had kinder voices. They could also be paid less money. The first women operator was Emma Nutt. She was worked in Boston, Massachusetts. She was hired on September 1, 1878.