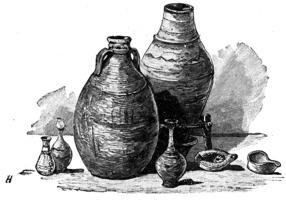 Oil for the Temple, Part 2

Judah excused himself to oversee the olive harvest. He assigned servants to see to his guests' needs and hurried with his son, David, to the top of the hill.

The two of them inspected the olive press. Judah made sure that all of the previously pressed fruit had been cleansed from the stone and the press. Rancid bits of olive would contaminate the new oil. He could not allow that to happen. The oil for the temple must be the very best.

Judah remembered seeing the former high priest at this press when his father ran it. The man had stood and watched as the oil ran from the crushed fruit. As each jar had been filled, it was closed up and sealed with the high priest's seal. That way he could certify that it was the purest oil.

Once the press was as clean as possible, they checked the olive oil jars. He wondered; would they have enough?