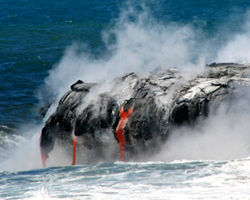 Caption: Streams of lava flow into the ocean from Mount Kilauea.

Ka'eo and his sister Mahina were excited. They were a little afraid, too. They were on the way to the Hawaiian Volcano Observatory. The observatory is on the edge of Uwekahuna Bluff on Mount Kilauea. Mount Kilauea is an active volcano.

"What if Mount Kilauea blows up?" Ka'eo asked.

"A volcano doesn't really blow up," his father said. "A volcano is a mountain that opens into a pool of molten rock under the Earth's surface. The pressure keeps building on the molten rock. Finally, eruptions happen."

"What's the difference between an eruption and blowing up?" Ka'eo asked.

"Blowing up destroys whatever has blown up. An eruption means something came out of the volcano. The volcano isn't destroyed."

"Volcanoes are very interesting," their mother said. "Volcanoes can cause lava to run down the hills. They can also cause mudslides, avalanches, tsunamis, and floods."

"Molten rock," her mother said. "It is very hot and flows downhill. It covers up anything in its way."