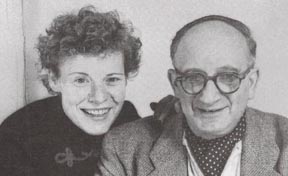 Hans Augusto Rey was born on September 16, 1898. He was born in Germany. Germany is a country in Europe. H.A. traveled to Brazil, a country in South America. He became a salesman there. While there, he married his wife, Margret. The two had met before in Germany. They found each other in Brazil and were married in 1935.

The couple moved back to Europe. They moved to Paris, France. H.A. was an artist. He was asked to create a children's book. It was called Cecily G. and the Nine Monkeys. One of the monkeys was Curious George. H.A. and Margret decided to write a book just about George.

During this time, World War II was going on. The Reys were Jewish. It was dangerous for them to be in France. H.A. built two bicycles. They took what would fit on the bikes and left. They made sure that they had their Curious George stories. They rode their bikes to Spain. They sold their bikes. They bought train tickets to Lisbon. Lisbon is a large city in Portugal. From there they traveled to Brazil and then to New York.