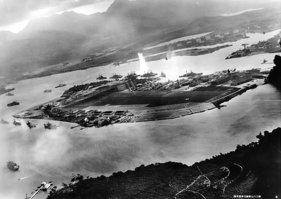 Pearl Harbor is famous in U.S. history. It was attacked by the Japanese on December 7, 1941. Many people died on that day. The attack caused the United States to enter World War II.

Hawaii was not a state in 1941. The U.S. had military bases there. There were many navy ships in Pearl Harbor. There were army, navy, and marine bases on the island of Oahu where Pearl Harbor is located.