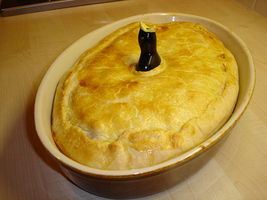 Pies, Pies, All Kinds of Pies!

What some people would call the perfect dessert has a long and interesting history. This dessert is made with all kinds of foods. Sometimes, it isn't a dessert at all! It can be the main course of a meal. This popular dish is, of course, the pie.

A pie is usually made with pastry dough on top, bottom, and all the way around filled with some kind of food. There are apple, cherry, pumpkin, peach, and blueberry pies. There are even meat pies, like beef or chicken, with or without vegetables. There's even a dish called lobster pie!

The pie got its start thousands of years ago - as early as 9500 B.C. The Greeks made their pies with crust as something for the country's many sailors to take with them on long journeys. The Romans also made pies and put the recipe for them in a Roman cookbook that dates to the first century.