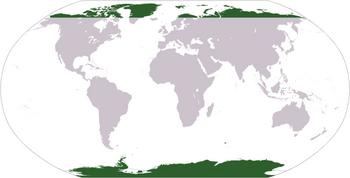 The Earth's North and South Poles are far away from each other. They have something in common- freezing cold! They are covered by snow and ice almost all year round. We call these two regions around the North and South Poles the Polar Regions. They make up the world's coldest biome. The North Pole is surrounded by the Arctic Ocean and the northern edges of three continents. They are Europe, Asia, and North America. We call this region the Arctic. At the other end of the Earth lies the South Pole. It is on a continent called Antarctica. Do you know which polar region is colder? Antarctica is colder. Indeed, no other place in the world can beat its record low temperature of 126 degrees below zero!

Because it is so cold and covered with ice, the Arctic and Antarctica are not good homes for most animals. Large mammals that live here have a thick layer of yellowish fat under their skin called blubber. Walruses, whales, seals, penguins, and polar bears all have blubber. It helps them stay warm and swim in icy-cold water. For animals that don't have blubber, they have other ways to keep from freezing to death. Antarctic ice fish have antifreeze chemicals in their blood. Puffins have waterproof feathers. Reindeer wear a thick fur coat.