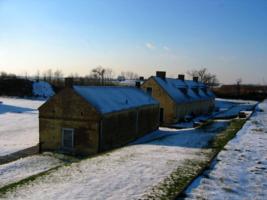 Many young boys like to play "war" as children. They use sticks for guns. They make the sounds they think the guns should make. When the young boys grow up, they find that the game they played is nothing like the real thing.

Joseph Plumb Martin was born in 1760. He grew up in Massachusetts. He grew up just as a new country was growing up. The people in the colonies were getting tired of British rule. The word "independence" was spoken more and more.

War started in the colonies in 1775. Joseph, like many young men his age, wanted to play a part in the revolution. He was disappointed to find that he was too young. He was not accepted into the colonial army.