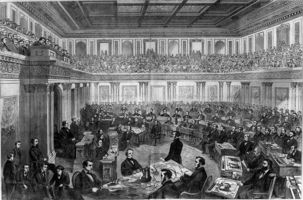 The South needed a lot of help rebuilding after the war. President Lincoln had already been thinking about how to help. He wanted to make it easy for the people of the South to be a part of the Union again. He wasn't the only one who had ideas on how to help. The plans to rebuild the South were called Reconstruction.

Congress thought that Lincoln's plan was too easy on the South. They were not happy with it. Lincoln never got a chance to fight for his plan. He was assassinated by John Wilkes Booth before the war was officially over. After he died, Andrew Johnson took his place. Republicans in Congress were happy. They thought that he would agree with a strict plan. They were wrong. His plan was as easy on the people in the South as Lincoln's was.

Johnson pardoned any Southerner who said he would follow Union laws. Each state had to rewrite its Constitution. The states had to cancel the vote to leave the Union. They also had to get rid of slavery. The states had to approve the Thirteenth Amendment. Then they could hold new elections.