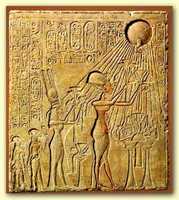 Religion was important in the daily life of Egyptians. They worshiped many gods. This is known as polytheism. During the New Kingdom period, the people of Egypt worshiped more than sixty gods and goddesses!

Gods and goddesses often symbolized the sky, wind, sun, or earth. The people believed that gods made the sun rise in the morning and set at night. They believed the gods watched over everything that happened on Earth and in the afterlife.