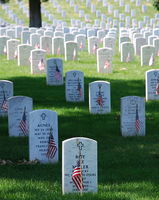 Since America's founding more than two hundred years ago, there have been many wars. At that time, the United States was at war with England. Not long after, there were two Barbary Coast Wars. Then came the War of 1812. Texas fought a war for its independence from Mexico. Then came the Mexican-American War. Next was the Civil War.

After the end of the war, Southern slaves who had been freed by Union soldiers wanted to honor them. A crowd of approximately ten thousand free African-Americans gathered at a cemetery in Charleston, South Carolina, on May 1, 1865. They honored the Union soldiers buried there with sermons, singing, and a picnic on the grounds. Graves were cleaned up and decorated. That was the first memorial service of its kind. It is often recognized as the first Memorial Day in America.