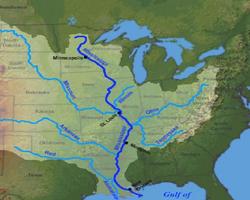 Rivers are large, moving bodies of water. They usually empty into an ocean. The United States has more than 250,000 rivers! They make up more than three million miles of waterways in the U.S. What is the biggest river in the United States? Take a guess, and then find the answer at the end of the story.

The world's earliest cities grew up along great rivers. Two were the Nile River in Africa and the Indus River in Asia. In the U.S., the Mississippi and Ohio Rivers helped our country grow westward. Steam ships and paddle-wheel boats carried people and supplies on rivers.

Did you know that the Continental Divide actually divides the rivers of the United States? This ridge high up in the Rocky Mountains runs north to south. It is a natural boundary where water drains to one side or the other. On the west side of it, all rivers flow west toward the Pacific Ocean. On the east side of the ridge, the rivers flow east to the Atlantic Ocean.