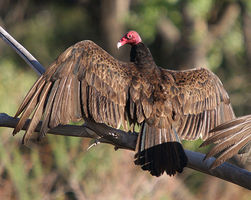 Ever had the craving for a hefty helping of rancid roadkill? Each year millions of animals are killed on the highway by motor vehicles. What happens to their carcasses after meeting their fate along our nation's highways? Turkey vultures consider them tasty treats. Magpies think they're YUMMY!

Animals that eat dead and decaying meat are called scavengers. Vultures, ravens, condors, crows, magpies, and some gulls are birds that most commonly scavenge for roadkill. The turkey vulture is found throughout North America. It is best known for its practice of feeding on the rotting flesh of dead animals called carrion (care-ee-un). YUM! The turkey vulture finds its meals using its keen vision and sense of smell. The vulture is one of the few birds that have a sense of smell. It flies low enough to smell the gasses produced by the process of decay in dead animals. Once they get a whiff of some rotting food, they begin to zone in on their meal. Flapping its wings and gliding, the vulture circles around until the odor of decaying meat leads them to their next course.

Turkey vultures are polite enough to wait until their dinner is thoroughly dead before they chow down. This is because the vulture's beak is not very strong. They have to wait until the sun cooks the carrion a while before they dig in. They usually start the party by pecking through the skin around the stomach. Rarely, a really hungry vulture will feed on vegetation or a washed up fish.