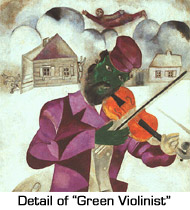 Marc Chagall died in 1985 in France. He was 97 years old. He is known as one of the greatest artists of the 20th century! Over the years, he completed more than 1,000 prints. He was also famous for his paintings and stained glass windows!

Chagall was born in Liozna near the city of Vitebsk. If you search a map for his birthplace, you would have to find the little country of Belarus. However, when Chagall lived there, it was not known as Belarus; it was still a part of Russia. Chagall lived in several different countries in his lifetime.

Chagall's parents were Jews. Therefore, Chagall and his eight siblings were Jewish as well. They didn't have much money. Marc, the oldest child, began his education in a Jewish elementary school. Then he was enrolled in a Russian school. That's where his talent was discovered. When he was nineteen years old, he moved to St. Petersburg (Russia) to study art further.