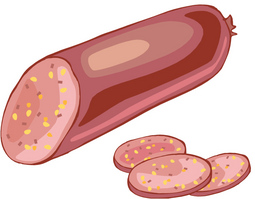 Sal worked in a deli. A deli is a place to buy ready-to-eat foods like meats and salads. Sal's job was to make sausages and fry chicken. Sal liked making salami best of all. Many people thought Sal made the best salami in the state.

It is not easy to make salami. It takes a long time. First, the meats are cut up. Then the spices are added. Sal adds some special herbs of his own. Everything is mixed together. Then it is put in a long tube called a casing. The mixture must cure for a long time before it is ready to eat. Some people cure theirs for three years! Sal will not tell anyone how he makes his salami. It is a secret.

One day Sal saw an ad in a newspaper. It told about a contest. The contest was for everyone who made sausages. There were prizes for the people who made the best of each kind of sausage.

Sal was looking at the rules. He did not see his boss walk into the kitchen.

"Hey, Sal, why don't you enter your salami? A lot of people think it is the best in the state. Maybe you could win one of those prizes."

"I don't know, Mr. Ricco. Maybe my salami is good. But maybe it isn't good enough for a contest."

"You'll never know unless you enter, Sal. I think your salami is good enough for a contest."

The next day, Sal went to work.