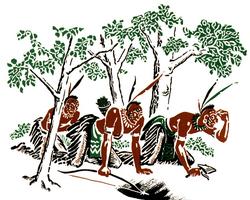 Some Native Americans left their lands without a fight. They did not want a war with the white settlers. Nations like the Seminoles did not leave. They fought to keep what was theirs.

The first Seminole War started in 1817. In November, a group of soldiers went to Fowl Town. This was a Seminole village. The soldiers wanted a chief there to give himself up to the Americans. They thought the chief had killed some families in Georgia.

The chief would not surrender. The soldiers attacked the town. They drove the Native Americans into a swamp. The soldiers also killed about twenty men. Then they burned Fowl Town.