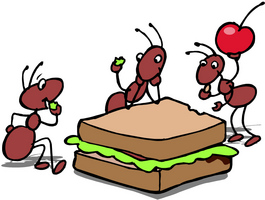 It was a cool, sunny day when Mr. and Mrs. Ant decided to have a picnic. It was a perfect day for a picnic.

Mrs. Ant looked in her refrigerator. She found a sandwich and a bit of potato salad. She also found a huge piece of cheese, almost as big as her head! There was a piece of chocolate cake there, too. There was plenty of food for the picnic.

Mr. Ant went outside. He told the children that they were going on a picnic. The children were very excited. Alice ran inside to get her doll. Adam got the kite he made from a leaf and a bit of string. April found the ball she had made from a stale breadcrumb.

When the food was ready, the Ant family walked to the park under the morning glory vines. While they walked, they talked about their week.

Alice and Adam talked about school. Alice said that she liked being in the band. She liked playing the drums. Adam said that he was getting really good at math. He made the best grade in his class on the math test.

April talked about her new friend, Betty. Betty was a beetle, but April liked her very much. They liked to play together.

Mr. Ant told the children that he had been very busy at work. It was almost fall and everyone had to work hard to make sure there was enough food for the whole anthill. He said that he was glad to be able to go on the picnic with his whole family.