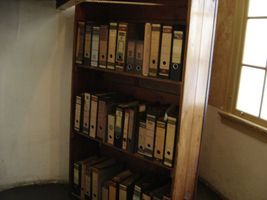 For more than two years the Franks, the van Pelses, and Dr. Fritz Pfeffer lived hidden in a small, cramped annex. They lived each day fearing the police and Hitler's horrific plans for Jewish people. On more than one occasion, Anne and her fellow refugees heard strange noises late at night in the office building connected to the annex. Each strange sound made the hidden people more and more fearful that one day their secret spot would be discovered.

Unfortunately, they were right. On August 4, 1944, policemen entered the office below the annex. With guns in hand, they searched the entire space. Then the policemen forced their way upstairs. They stopped at the bookcase that blocked the stairway and door to the annex. Within moments, they moved the bookcase and made their way up to the small apartment. Anne and her family were in shock! They stood in silence, living out the nightmare they had all dreaded.