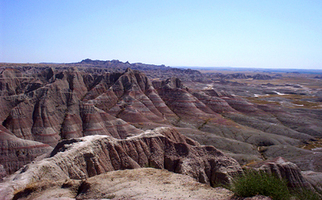 Many years ago, the Lakota, a tribe of the Sioux Nation, called them "mako sica," which means "bad lands." French trappers - crossing areas of rugged land where it seemed nothing grew - said that they were "bad lands to cross." Today the Badlands are explored by tourists instead of by trappers.

When someone speaks of badlands, most people think of the Badlands in South Dakota. That is not the only place lands like that exist, though. Badlands are found in several parts of the United States and Canada. There are some in other countries around the world.