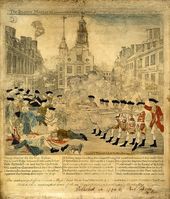 King George III sent soldiers to Boston. The citizens of Boston were becoming unruly. He wanted soldiers there to keep them in line. The colonists did not like to see the British "redcoats" walking around their town. Colonists hated the new taxes. They resented the British tax collectors who (they felt) spied on colonial store owners. Some tax collectors were tarred and feathered. The citizens of Boston resented the soldiers, too. The colonists often baited and harassed the British soldiers. They tried to get the soldiers to desert the king and join them. On March 5, 1770, things got out of hand.

It started when one young man shouted bullying remarks to a group of soldiers. The soldiers were guarding a customs house where the king's money was stored. A crowd of colonists quickly gathered. More soldiers were called in for backup. Soon, the crowd was throwing snowballs at the soldiers.