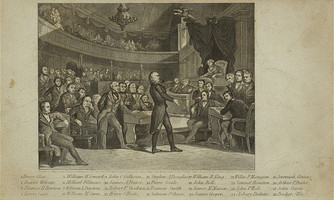 Caption: Henry Clay, "the Great Compromiser," introduces the Compromise of 1850 in his last significant act as a senator.

Every few years there was a new problem between the slave states and the free states. Each time, it looked as if the country would split into two. This happened again in 1850. But like all the times before this one, a compromise saved the country.

In 1850, there were the same number of slave states and free states. That year, California wanted to become a state. That would mean there would be more free states than slave states. Slave states would be outnumbered in the Senate. Again, they threatened to secede (leave the Union).

Henry Clay begged the North and South to find a way to compromise. He had worked out the Missouri Compromise. Now he was called on to find another compromise. Clay was seventy-three years old. He was sick and weak. Still, he tried to find an answer.