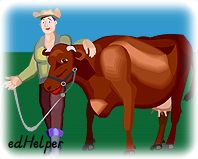 Max left the big city for a week in a small town. His Uncle John had asked him to come. Uncle John had a son named Tate. Max slept on the floor in Tate's room. He and Tate played games. Max was glad that he had come.

Max wiped some mustard on his pants instead of using a napkin. "I have heard of potato chips," he said, "but I have never heard of cow chips."

Uncle John laughed. He swallowed his last bite of hot dog. "Cow chips aren't like potato chips at all! This is a funny contest. I'll buy a ticket. They are only five dollars each."

Max looked around. He saw a Ferris wheel. He saw bumper cars. He saw cotton candy. "Where are the cow chips?" he asked.

Tate laughed and tossed his cup in a trash can. "There won't be any cow chips until after three o'clock."

The three of them strolled out to a green field. Other people were standing in the field. Someone had mowed it and drawn a huge chalk grid on it. There was a chalk number written inside of each square in the grid.

"I put my money on plot number eleven," Uncle John said, looking at his ticket. "The winner gets five hundred dollars!"