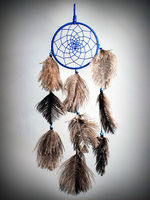 Dream catchers are usually made from wooden hoops that are about three and a half inches in diameter. The hoops were originally made from willow branches. The inside of the hoop is strung in a spider web-like design with twine or sinew. The webbing was originally made from plant fibers or sinew string that had been dyed red. One or more feathers was always hung from the netting. The feather is a symbol for breath or air.