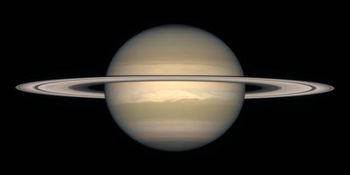 Jupiter, Saturn, Uranus, Neptune. These are giant gas planets. Scientists think they have small, solid cores. The core is surrounded by fluid. Lightweight gases such as hydrogen and helium make up their atmospheres. With all their satellites and ring systems, the gas giants are very interesting to observe.

Jupiter's atmosphere is made of mostly helium and hydrogen. There are strong winds in its upper atmosphere. These cause violent storms that rage almost all the time. The Great Red Spot is actually a giant storm. It has been seen for at least 180 years.