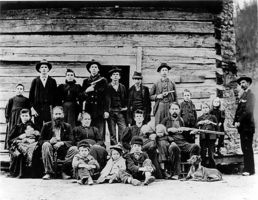 The Hatfield and McCoy Feud

The picture shows some members of the Hatfield family, taken about 1888. Anderson "Devil Anse" Hatfield is the second from left, seated and holding a gun.

Have you ever played the circle game Gossip? The first person whispers a message to someone sitting next to him or her and the message is repeated around the entire circle. The last one to receive it repeats the message aloud. Most of the time, the final message doesn't sound anything like the original.

So many tales have been told about the Hatfield and McCoy feud that no one will ever know the true story. The story has been told so many times that it has become a metaphor for family feuds. The story involves two West Virginia and Kentucky back-country families. The McCoy clan lived mostly on the Kentucky side of the Tug Fork River. The Hatfield clan lived on the West Virginia side. Both families were some of the first settlers in the area.

When the American Civil War broke out, most of the Hatfields sided with the Confederacy. Anderson "Devil Anse" Hatfield led the Hatfield clan when it came to confrontations. The McCoys sided with the North. Several McCoy family members went off to fight for the Union Army.

In the Hatfield-McCoy area, the local Homeguard were ex-confederates called the "Logan Wildcats" including Devil Anse Hatfield. The Homeguard was loosely connected to the Confederate Army. It was their job to be the last defense against any invading Union forces. There was no one around to see to it that they did not take their "defense" too far.

It is thought that the first real violence occurred sometime in 1865. It was a feud over the murder of returning Union soldier, Asa Harman McCoy. Harman had been discharged from the Union army early because of a broken leg. A few days after he returned home, he was murdered. The Logan Wildcats took the blame. As a result, Devil Anse Hatfield was one of the first suspects. It turned out later that he was actually at home sick at the time of the murder. There was a brief investigation, but no one was ever held accountable for the murder.

The second incident occurred in 1878 over the ownership of a hog. Floyd Hatfield had it and Randolph McCoy said it was his. The Hatfields thought since the pig was on their land, it was theirs. The McCoys said they knew the pig belonged to them because of the identifying "notches" in the pig's ears. The two families faced off in court. Ironically, Preacher Anse Hatfield, a Baptist minister and justice of the peace, presided over the case of the six McCoys involved in the dispute.

Bill Staton, a relative of both families, swore to Floyd Hatfield's ownership. This caused the McCoys to lose. Within months of the trial, Bill Staton was dead, murdered by Sam and Paris McCoy.

Although Sam was tried for the shooting, it was useless. The McCoys were enraged that Sam had stood trial at all. Instead of gratitude, they felt an even greater hatred for the Hatfield clan. It wouldn't take much for the seething frustrations of both families to burst into all-out war.