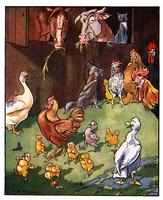 "Mr. Yoder," asked Riley as he put up his hand, "why is it such a big deal that people raise endangered livestock? I mean, once you've seen one cow, you've pretty much seen them all."

Mr. Yoder shook his head. "You haven't seen many cows, have you, son?" he asked.

Riley shook his head uncertainly. "I thought not," said Mr. Yoder. "You are in good company," he continued. "Most people don't realize that there are many different breeds of cows. Even fewer of them know that many breeds are endangered. They could become extinct. That's one of the reasons I chose to have a heritage farm. I have many endangered breeds here."

"I thought that only wild animals could be endangered," said Evan, joining the conversation.

"There are many domestic breeds of animals that are even more endangered than the wild ones," said Mr. Yoder. "I have some cows, pigs, and hens here on my farm that are endangered."

"Why are they endangered?" asked Evan.

"There are many reasons why the populations of certain breeds fall. Sometimes they don't grow as fast or as big as others. Farmers choose different breeds that grow bigger or faster. Some breeds are more useful on a small farm. Now that farming is big business in many places, those animals that work best for a small farm are slowly dying out."

"Yes, perhaps," said Mr. Yoder. "Let me run an idea past you. Let's say that you are raising chickens for eggs. You choose a breed of chicken that lays a lot of eggs. All the other chicken farmers are using the same breed. In fact, most of the chickens come from the same genetic stock. They are all closely related. If one bird gets sick, they could all get sick and die because they are like clones of each other. There is little genetic difference among them. Is that a good situation to have?"